Amorphous phases are largely invisible in powder XRD patterns. Phase quantifications by Rietveld refinement therefore only determine relative phase quantities normalized to the sum of all crystalline phases. For example, a refinement result of 35 wt-% anatase + 65 wt-% rutile should be read as: „Of all crystalline phases, 35 wt-% are anatase and 65 wt-% are rutile“. The result does not contain any information about potentially present amorphous phases.

The amount of amorphous phase can be determined by admixing an internal standard in a known quantity. The internal standard must be 100% crystalline. It should be a highly symmetric structure generating few but intense diffraction peaks, and it must not react chemically with the sample. Adding a precisely known quantity of such a standard material to the sample allows to rescale the refined phase quantities to the standard’s known quantity rather than normalizing the sum to 100%. As a result, absolute phase quantities are obtained, with the difference to 100 wt-% consituting amorphous phases.

The following tutorial demonstrates how amorphous phases can be quantified by the internal standard method using Profex. The example files were taken from the BGMN software bundle and can be downloaded:

This is the standard GOAL setup that will normalize the sum of all quantities to 1. Run the refinement to quantify all crystalline phases. The resulting phase composition will be: 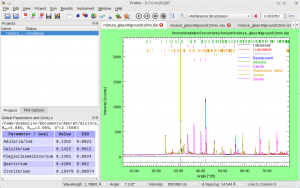 Obviously all phases are strongly overrated. The reason is the unknown and unseen amorphous glass content. But knowing that the true zincite content is 10.0 wt-% allows rescaling all phase quantities by factor 10.0/15.48. Furthermore, as zincite was added manually and was not part of the initial composition, the remaining 90 wt-% should be scaled to 100 wt-%.

These rescalings can easily be accomplished with Profex. Select „Project -> Set Internal Standard…“

Zincite will no longer be reported, but a new phase „Amorph“ was introduced. The GOAL calculations include all rescalings as described above. Run the refinement. 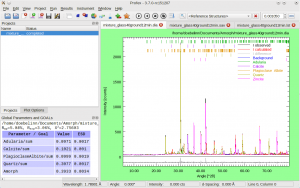 The new phase quantities are:

To revert the internal standard calculation and use the common normalization to 100% (including zincite), just select „Project -> Unset Internal Standard“.