Note: With the release of Profex 4.1, import of CIF files has been improved and the example files used below do not require manual fixing anymore. Most CIF files of good quality are now imported automatically like the Vaterite example below. However, some non-standard CIF files may still require user interaction, hence this tutorial may still be useful if the CIF file is incomplete or uses pseudo symmetries.

The CIF file format (Crystallographic Information File) is a standard file format specifically developed for the exchange of crystal structure data. CIF files can be downloaded from various resources, such as the Crystallography Open Database and the American Mineralogist Crystal Structure Database. For this tutorial, download and extract the example files: Cif-Files.zip.

CIF files cannot be used by BGMN directly. They must be converted to BGMN’s proprietary structure file format (*.str). This can be done by Profex‘ structure file import. If the imported CIF files contain all information required by BGMN, the import feature works fully automatic. However, CIF files often lack some important information or use ambiguous Hermann-Mauguin symbols. In that case, import in Profex requires some user interaction. The following examples demonstrate how to import CIF files with and without user input.

Select the file „Vaterite.cif“ from the examples offered for download above. It will be opened in the following dialog: 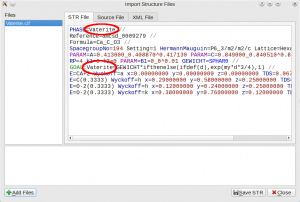 There are no warnings printed at the bottom of the dialog, and no dialogs prompted for user input. This is the ideal case with complete CIF files. All we have to do is to check that the PHASE name and GOAL only contain letters and digits, but not any of the following characters: <space> _ / \ + – *. The following names would be illegal: „Ca Carbonate“, „Ca-Carbonate“, „Ca_Carbonate“. The following names are allowed: „CaCarbonate“, „CaCO3“, „Vaterite“. If illegal characters are present by default, replace them. Then click „Save STR“ to save the file in the Structure database directory. It will immediately become available in Profex.

Structure file directories are usually found in the following locations:

Click „File -> Import Structure File…“ again and select „Aragonite.cif“. This time, a dialog will be shown prompting for user input.

The CIF file uses a different notation for the HM-Symbol than BGMN, and Profex‘ automatic identification failed. The dialog shows the symbol read from the CIF file (red circle) and offers 6 different settings supported by BGMN. We have to identify the matching setting. The only one with the same sequence of mirror and glide plane symbols (m c n) is setting number 5: P2_1/m2_1/c2_1/n. Therefore, select the line with „Settings=5“ and click „OK“.

Check for valid PHASE and GOAL names as described in the Vaterite example above. Then save the structure file.

Click „File -> Import Structure File…“ again and select „Calcite.cif“. This time, the space group number was not specified in the CIF file. The user is prompted to specify the International Tables number for space group „R -3 c“. It will have to be found elsewhere. The correct number in this example is 167. Select 167, the field „Supported Settings“ should list at least one symbol closely resembling „R -3 c“. Then click „OK“. 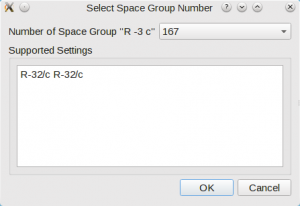 Next the user will have to select again the correct space group setting. For number 167, choose between a trigonal and a rhombohedral setting. If not sure, pick trigonal, it can still be changed later.

The structure file will be created, but at the bottom of the dialog some warnings are printed out: 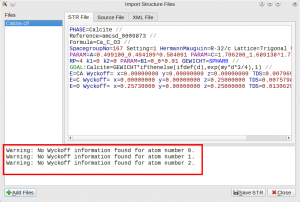 Wyckoff symbols for all three atomic sites were missing. They will have to be added manually. To figure out the correct symbols, click „Tools -> Browse BGMN Space Groups“ in Profex‘ main window to open the following dialog: 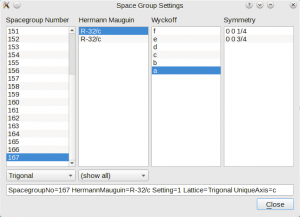 This dialog lists all space group and Wyckoff symbols supported by BGMN. Select space group number 167. It will again show the two space group settings (trigonal and rhombohedral), as well as all Wyckoff symbols and associated symmetry operations. The coordinates of the Calcite atoms are:

Click through the Wyckoff symbols of both space group settings and compare the symmetry operations with the atomic coordinates. Which setting describes the coordinates better? Setting 1 (trigonal) has Wyckoff positions describing all three atoms:

For setting 2 (rhombohedral) there is no such coincidence except for Ca at 0 0 0. Therefore stick with the trigonal setting (1) and manually add the Wyckoff symbols: 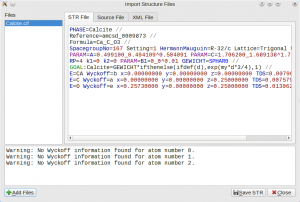 Then save the file in the structure files directory.