The sample contains α-TCP (α-Ca3(PO4)2) with two secondary phases β-TCP (β-Ca3(PO4)2) and β-CPP (β-Ca2P2O7). The powder was intensely milled in a high-energy ball mill as part of the production process. No further milling was therefore required for XRD sample preparation. Rietveld refinement was employed to quantify the amount of contaminates and the phase purity of α-TCP, respectively.

The raw file (150121-01.raw, Bruker RAW V4 format) was loaded into Profex, and by using the add phase dialog (+) a new refinement control file was created. The instrument configuration RMS-D8-ADS-15-LynxEyeXE was selected, and phases alphaTCP.str, betaTCP.str, and betaCPP.str were added. The pattern was clipped at 6° 2θ (WMIN=6) to remove the trace of the primary beam. 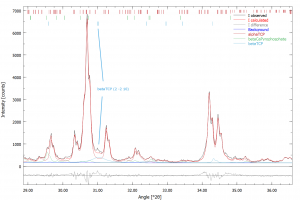 Detailed analysis of the peak shape revealed that there was a problem with the foot areas of strong α-TCP peaks. This was also the reason for the β-TCP (2 -2 10) peak drowning in the foot of the α-TCP peak to the left. No profile shape parameter (anisotropic k2, isotropic k1) was able to improve the fit.

It turned out that milling of the sample at the end of the production process was intense enough to create a fraction of much smaller crystallite size. The crystallite size of all three phases was therefore bimodal, and the profile shape parameters B1, k2, and k1 were not sufficient to describe the peak shape. Instead, for each of the three phases one highly crystalline contribution and one with severe peak broadening had to be refined to describe the overlap of sharp peaks with wide ones.

It could be assumed that the only difference between crystalline („coarse“) and nano-crystalline („fine“) fractions of the three phases was the peak broadening by crystallite size. No differences in unit cell dimension or atomic positions was expected. Rather than refining six phases independently (α-TCP coarse, α-TCP fine, β-TCP coarse, β-TCP fine, β-CPP coarse, β-CPP, fine), BGMN’s concept of sub-phases allows to only refine certain parameters independently, while coupling all other structural parameters. Here is how it’s done:

The following line was added to all three structure files to instruct BGMN to refine two sub-phases for each structure:

Indeed the fit was drastically improved and could be considered almost perfect, also at the formerly problematic locations. However, the amounts of the two contamination phases were so low that there was a high risk for over-refining the data, as most peaks of both phases excessively overlapped with the much stronger α-TCP peaks. At the same time wrong micro-strain and crystallite size refinements could significantly bias refinement of phase quantities. It was therefore decided to couple both crystallite sizes B1[1] and B1[2], the micro-strain parameter k2, and the ratio of fine-to-coarse sub-phase p of β-TCP and β-CPP to the micro-strain, both crystallite sizes, and the coarse-to-fine ratio of the primary phase α-TCP to at least approximate the values in the secondary phases. Considering the preparation route of the sample and the similar hardness of all three phases, it was a sane assumption that:

The parameters k2, B1[1], and B1[2] were refined globally in the refinement control file by adding the following lines:

p was the fraction of coarse phase. In all three structure files the profile parameters were refined as follows:

Additionally, the following lines were added to all three structure files to couple the coarse and fine fractions:

alphaTCPc was the coarse fraction, and alphaTCPf the fine one. This was done for betaTCPc, betaTCPf, betaCPPc, and betaCPPf, too. In the refinement control file, the quantities were calculated as follows to report total phase quantities:

After the refinement the fit looked excellent: 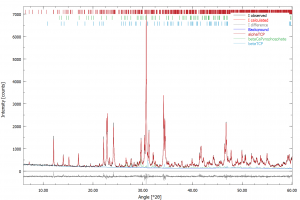 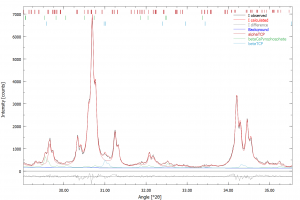 The following refinement strategy turned out to be successful:

As a result a perfect fit was obtained without over-processing the data, peak shapes were described very accurately, and phase quantities seemed to be reliable.